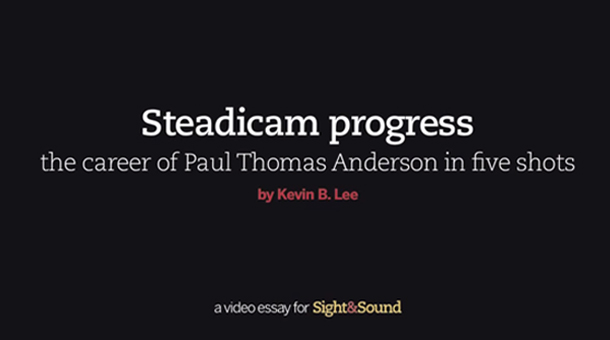 Tracking a journey of camera journeys from Hard Eight to There Will Be Blood, Kevin B. Lee wonders if the director has put away showy things.

Thinking on what sets The Master apart from Paul Thomas Anderson’s earlier films, what strikes me most vividly is a marked difference in camera movement and staging. I wouldn’t be surprised if a proper cinemetric analysis found that up to half of the film’s running time consists of close-ups with little to no camera movement.

This is a far cry from the run-and-gun days of Boogie Nights and Magnolia with their stunning array of sweeping Steadicam shots, push-ins and whip pans. But upon surveying his career film by film, one can trace an evolution in his technique. This video essay examines one signature tracking shot from each of Anderson’s five previous features, showing how each epitomises his cinematography at each point, from the flashiness of his earlier films to a more subtle approach that favours composition over movement.

While The Master offers a couple of swirling tracking shots in a department store, and later a pair of straight-line lateral tracking shots to match the onanistic thrill of motorcycle joyriding, the film settles more often into shot/reverse shot dialogues in cozy interior sets. It seems that Anderson’s camera strategy here has less in common with Scorsese, Altman or even Kubrick (with all of whom he’s frequently compared) than with Jonathan Demme. Indeed, in the DVD commentary of Boogie Nights, Anderson expresses a profound emulation of Demme, though Demme himself couldn’t recognise a shot from Boogie Nights that Anderson claimed to have blatantly derived from him.

Here the connection is apparent as never before, in a film that seems less concerned with riding the kinetic thrill of a camera set in motion than in tapping the psychic voltage of physiognomies seen up close. In his most psychologically intimate film to date, Anderson largely foregoes his signature camera movements in order to tunnel into the human mind.

Hard Eight
In his first feature, Anderson’s use of Steadicam already exploits the dramatic qualities of cinematography, juxtaposing Sydney’s dynamic movement against other gamblers seated like zombies at their slots and screens. The camera whips to a side-angle view of Sydney, tracking him laterally; in doing so it seems to pass through walls of ordinary gamblers. It then opens into a wider view of the floor, a panorama of light and sound, both realistic and expressive.

No other shots are as flashy as this one in Hard Eight, a fairly low-key drama led by a reserved, even inscrutable lead performance. But Anderson allows this one shot to give a glimpse into Sydney’s subjective experience, the thrill of walking the casino floor. It’s a precocious display of character development achieved purely through camera movement and staging. The camera revels in this sensory landscape and simultaneously transcends it, as Sydney advances to his rightful place at the head of the craps table.

Like the shot in Hard Eight, the camerawork owes a debt to Martin Scorsese’s GoodFellas and Casino, the way it explores a historical milieu by moving through it. But a key difference is that Scorsese’s camera asserts a documentary authenticity, primarily through an explanatory voiceover and a steady accrual of factual observations. Anderson discards those elements, plunging us directly into a state of sensory overload, washing us in a lurid palette of red and orange punctuated by neon.

This three-minute shot introduces us to eight characters, perhaps more than we can keep track of, but the feeling is always pleasurable, like being at a party where you don’t need to know everyone’s names to enjoy their company. Anderson’s camera is exultant, wanting to encompass everything and everyone at once, but if you look carefully, you’ll notice that at almost every point your vision is trained to focus on one particular character or area of activity, so that you’re never overwhelmed or confused. It also employs lighting cues like this spotlight to train our attention to a character’s arrival. For all its panoramic spectacle, this is still a linear viewing experience.

The shot ends with a double climax, a collision of speed versus stasis. A lateral sweep across the dance floor: a joyous expression of Rollergirl’s young body in motion, then slows to half speed to dote on young Eddie Adams, backlighting his youthful good looks like a discovery hidden in plain sight, waiting to burst upon the scene.

Magnolia
This single two-minute-five-second shot encapsulates the essence of Anderson’s three-hour magnum opus, connecting five different characters with the sheer velocity of forward motion through narrative space and time. Working with an unlimited budget and final cut, with this film Anderson enjoyed a creative freedom afforded to the rarest of directors.

But with that freedom came a great anxiety, one that pervades the film. It’s an anxiety to prove himself, to do something even bigger than Boggie Nights. And it informs the hurried pacing of this particular shot, as the camera moves faster than what we saw in his previous films. We no longer have the sense of coming into one’s own as in Sydney, or in celebrating and absorbing a subculture as in Boogie Nights. Here the shot amounts to a relay race between five characters organised in six different configurations. The point of focus is exchanged between them smoothly along a single line of movement.

Ostensibly, this shot wants to reveal the working guts of a Hollywood television studio, but it doesn’t settle long enough on anything in particular to let you take in the details, other than the anxious sensation of people working and moving. If there are any potential areas of interest on the periphery, they pass fleetingly. It’s a shot that wants to be everywhere at once, and nowhere in particular. The attraction is in the camera movement itself as a spectacle of kinetic exertion: movement for the sake of movement.

Punch Drunk Love
With Punch Drunk Love, Anderson moves away from ensemble filmmaking in favour of a single character study, but ironically, the simpler premise allows his tracking shots to discover more complex applications. He does carry over one aspect of Magnolia: the sense of gnawing anxiety afflicting his protagonist. But he takes a radically different approach in portraying that anxiety cinematically. Instead of having his camera race frenetically, it tracks slowly in an ominous forward push, practically nudging Barry unwittingly through the gauntlet of his sisters as they heap casual abuse upon him.

Unlike the shots from the previous films, the protagonist is no longer held in the centre, but pushed to the sides of the frame. The slowness of the tracking movement allows us to follow not only him and also his sisters as they move around and against him. It also allows Anderson to utilise the space around the shot: notice how one sister calls from offscreen in one direction, as another sister creeps in from the other direction. This kind of lateral push-and-pull creates a counter movement to the tracking shot’s forward movement, a multidirectional tension that’s new to Anderson’s repertoire.

It’s even more prominent in this forward tracking shot. Here we really see Barry’s frustration of being pulled left and right throughout the film while all he wants is to go forward. It’s as if Anderson is using Barry as an on-screen surrogate to challenge and complicate his own forward moving impulses.

There Will Be Blood
This two-and-a-half-minute shot is one of the longest in There Will Be Blood, yet it only moves several feet. But within those few feet it is able to create four distinct compositions, a profile closeup of Eli Sunday entering Daniel Plainview’s office, an obstructed wide shot of Plainview at his desk, a medium three-shot of Plainview, Sunday and Fletcher, and a final closeup of Sunday. Each of these shifts changes the dramatic tenor of the scene and the dynamic between its characters, exploring and expositing the space between them.

One way that it does so is by providing multiple steady points of visual focus for the viewer, as demonstrated in this scientific study by the Dynamic Images and Eye Movement project, that tracked the eye movements of several viewers to see what they were looking at in the frame. This steady multiplicity of focal points is something radically different from Anderson’s earlier films, where one dominant point of focus takes our eyes through the shot.

This camerawork may not look as flashy as those of his earlier films, but the dynamism and energy is there, compressed in slowness, steadily building dramatic tension, pushing towards release.