By Brian Swartz, Of the Weekly Staff

Since the advent of silent films, producers have struggled to film scenes that require a cameraman to move simultaneously with the action. Hand-held cameras allowed such movement, but before the Steadicam, hand-held camera movement “could be shaky,” said Todd Eastman, a faculty member developing the digital filmmaking curriculum at the New England School of Communication in Bangor.

Todd Eastman, a faculty member at the New England School of Communications in Bangor, films footage with a Steadicam last August during a Civil War re-enactment held at the Good Will-Hinckley School in Fairfield. He shot the footage for a Maine Public Broadcasting Network documentary titled “Sixteenth Maine at Gettysburg.”

The effects achieved with such cameras in 1999’s “Blair Witch Project” epitomized such handheld motion, he noted.

“Most reality TV shows are [filmed with] hand-held [cameras],” Eastman said. “The cameramen have to be able to go where the action is.” He cited the Discovery Channel’s “Deadliest Catch” as “an example, especially out on the deck. There’s a lot of movement; the cameramen have to follow it.

“Hand-held [filming] is a very different skill to learn and perform,” he said.

Then “inventor and cameraman Garrett Brown” introduced the Steadicam in 1975, according to Wikipedia. “He wanted the freedom of movement with the camera with all the elements of a dolly shot,” Eastman said.

Although Steadicam is a brand name owned by Tiffen, the term generically describes a technology also sold by other companies, such as Pro and XCS. The technology enjoys widespread use.

“Music videos use it a lot,” Eastman noted, and the technology works well in TV show production “because it’s so fast to set up.” The medical drama “ER” (1994-2009) incorporated “the first major widespread use of Steadicam technology in a television narrative production, as far as I know,” he said.

Steadicam technology adapts well to “live events,” including shows like “American Idol,” and CNN uses Steadicam video in “The Situation Room” with Wolf Blitzer, Eastman said. Other networks using the technology with their “in-studio commentators” include CBS and Fox News, he pointed out.

“I see it [used] in the NFL,” particular in end-zone footage, he said. 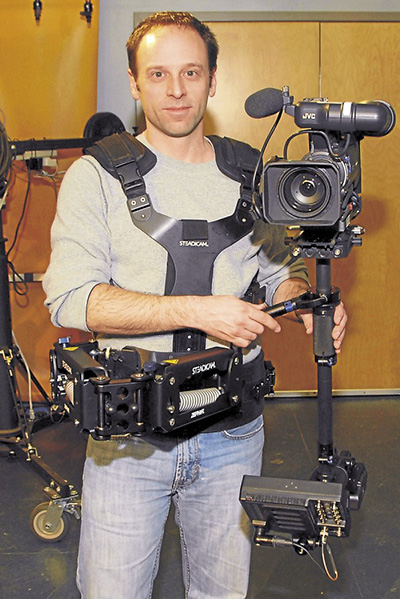 Todd Eastman wears the full Steadicam gear that a camera operator would utilize during actual filming. The vest provides a mount for the hinged arm (foreground) that holds the rig on which the actual camera and battery are mounted.

Film producers use Steadicams in different applications. According to Wikipedia, “the Steadicam was first used in the Best Picture-nominated Woody Guthrie biopic “Bound for Glory.”

“A Steadicam cam rig was also employed during the filming of ‘Return of the Jedi’ … to film the background plates for the speeder bike chase,” Wikipedia reported. Garrett “Brown walked through a redwood forest, with the camera running at a speed of one frame per second. The end result, when projected at 24 frames per second, gave the impression of flying through the air at perilous speeds.”

Eastman has operated a Steadicam in various narrative and documentary productions. Not long ago he was a “Steadicam operator [filming] on a documentary in Mexico and Guatemala.” Last summer the Maine Public Broadcasting Network hired him to shoot Steadicam footage during a Civil War re-enactment held at the Good Will-Hinckley School in Fairfield. That footage will be part of a 30-minute documentary titled “Sixteenth Maine at Gettysburg.”

Eastman stressed that the term “Steadicam” refers only to the equipment — the vest, the arm, and the rig — used to mount a camera, not a camera itself. Neither is the equipment inexpensive; he estimated that the Steadicam acquired by NESCom costs from $12,000 to $14,000, with the camera and batteries extra.

Eastman introduces the Steadicam to NESCom students in a class titled “Video 2”; students also learn about camera dollies and jibs in this class, too. The class focuses on video production and how more advanced equipment facilitates production; “I come in to teach the Steadicam portion of Video 2,” Eastman said.

Referring to the Steadicam, he explained that “we introduce it for the sole purpose [that] this piece of equipment exists and they could very well see it at some point in their careers.” A student envisioning a camera operator career that focuses on this piece of equipment would need to become proficient with a Steadicam; “typically someone’s not going to be hired as a Steadicam operator without a reel” that demonstrates that proficiency, Eastman said.

In other career fields, such as producer, director, or assistant director, “you would need to know how the Steadicam functions … what shots you can create and effect with it,” Eastman said.

Career opportunities are inadequate for Steadicam operators in Maine; “you’re going to have to go to the bigger markets,” Eastman said. “Atlanta is booming right now. Austin is a good film city and, of course, there is New York and Los Angeles.

“Steadicam operators are a very small, tight-knit community. Networking is very important for people starting out,” he noted. To find employment in “big-budget films, that’s usually the goal. I stuck with Indie; you can make more of an artistic expression in that.”

In most NESCom classes involving the Steadicam, “there’s often that one student who takes naturally to it,” Eastman said. “I tell the students that it is a skill that needs to be practiced.”

He demonstrated the Steadicam by donning it. First Eastman put on the vest, which slightly resembles the body armor worn by Roman soldiers. “It’s a framework,” he said while tightening the fastenings. “Once you put this on and tighten it, you’re a human ski boot.”

If the vest is worn properly, a Steadicam operator “can use the structure of the vest to put the weight on” the hips, Eastman said, tapping that part of the vest encircling his hips. “You want to keep the weight off your back to avoid strain.”

Each Steadicam arm contains springs; other manufacturers use different shock-absorption methods. “The arm is a shock absorber,” Eastman said. “That’s what is going to take all your bodily movement and get it out of the picture.”

The arm fits into a socket block on the vest. After he stooped and made the connection between vest and arm, Eastman stood straight, and the arm rose of its vertical storage rack. Attached to the arm was the rig that mounted the camera, a 12-volt battery, and the camera monitor.

Now wearing the Steadicam, Eastman grinned and said, “It’s like having a 5-year-old hanging off your shoulder. A Steadicam operator adjusts all the equipment so that the camera remains perfectly horizontal, no matter the shooting situation; at 20-25 pounds in weight, the equipment is somewhat heavy and awkward to use.

“When you’re filming, you’re looking down at the monitor,” Eastman said. “I have to be careful when I’m moving with the camera. If I trip, the whole system goes down. An operator always has a spotter/assistant for safety.”

When working outdoors as he did last August during the MPBN filming, “I’m looking for divots, for logs hidden in the grass” that could trip him. “You shouldn’t be working alone; that’s why a Steadicam operator always has an assistant,” he said.

“Here at the school, it’s a two-person piece of equipment,” Eastman noted. Once we cover it in class, they are able to pair up, get their hands on it, and get creative.

“The assistant never leaves the operator,” he said. As a Steadicam operator moves, the assistant watches for “trip hazards” and follows the action to make sure the operator gets the required shot.