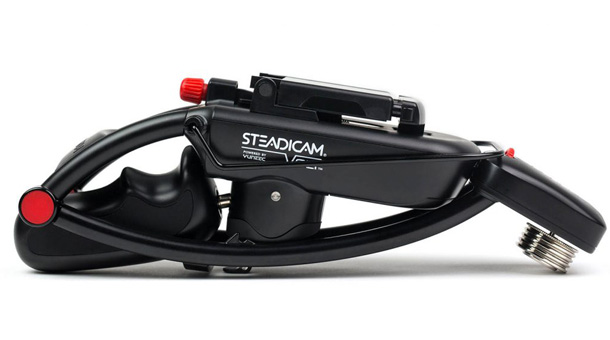 A Steadicam rig is a useful piece of video photography gear for maintaining even level horizon while reducing the bouncing effect when walking. 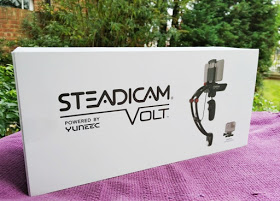 While Steadicam rigs are pricey, you don’t have to invest thousands to get similar results to real 40-lb Steadicam rigs. You can get quality smooth shots without software touch ups much like a Steadicam operator with an electronic gimbal stabilizer solution like the Steadicam Volt by Tiffen.

Tiffen’s Steadicam Volt is both a 3-axis electronic and mechanical gimbal built around the design of the Steadicam Smoothee Stabilizer. 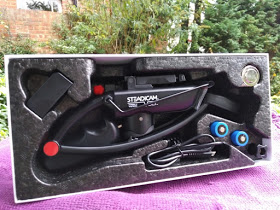 What’s neat about the Volt is that it takes advantage of the photographic capability of smartphones and compliments it with gimbal stabilization technology for better quality stills and professional looking video. The Volt even improves the Optical Image Stabilisation (OIS) that is integrated in the camera of some smartphones.

The experience you get with your smartphone mounted on the Volt is simulated inertia in operation that recreates a natural and less robotic smooth flow that you get with heavier steadicam rigs. The Volt folds up to a self contained form factor too which is nice as it is easy to carry with you for a variety of shooting situations. 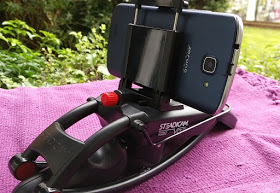 The Steadicam Volt electronic stabilizer can hold a GoPro, iphone or android phone steady while getting much better unrestricted tracking shots with faster tilts and pans than holding your phone in your hands.

Right of the box, the Volt is ready to go. The Volt stabilizer comes preinstalled with a smartphone cradle to secure your phone, as well as 7 magnetic counterweights to calibrate the Steadicam Volt. You also get an adapter to attach a goPro.

As mentioned earlier, the Volt gimbal is both electronic and mechanical. This means even after the batteries run out you can still operate the Volt. 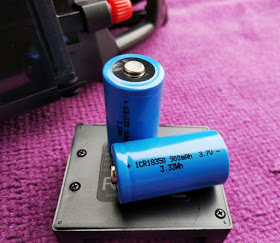 The two ICR 18350 rechargeable Li-On batteries have a 3.7V 900mAh 3.33Wh rating each which translates to a total of 1800 mAh 6.66Wh of power storage that can power the Volt gimbal for several hours. 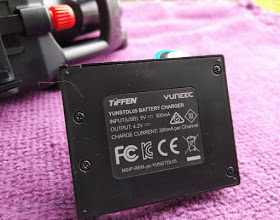 Battery life depends on how much load you put on the gimbal motors of the Volt. When you get the Volt properly balanced you’ll be putting little load on the motors so the batteries can last you a good 6 to 8 hours.

The YUNSTDL05 battery charger cradle current input rating is 5V 500mA USB so you want to charge batteries ideally from the USB 2.0 port of a computer or laptop. The current charge output is 4.2V 300mA per battery

The Steadicam Volt comes also with a companion app called Tiffen Imagemaker app to enhance the functionality of your smartphone camera with variable frame rates and shutter speeds. 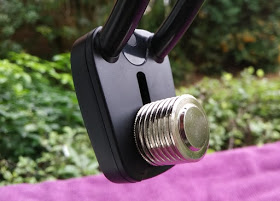 Setting up the Steadicam Volt is easy. Simply open it up from its folded position, remove the rubber cover and make sure that the switch is powered off to prevent the gimbal handle from spinning around when inserting the batteries.

Then, mount your smartphone on the Volt cradle and get the phone centered according to the red indicator.

You can use any phone that is up to 8.5 cm wide and 250 grams (or less) in weight thanks to the wire brace which makes rotating your smartphone with one hand easier to control for running and following shots.

Lastly, add the counterweights on to the Volt. As you can see from the image below there is threaded hole which is designed for one of the threaded counterweights.

When you power on the Volt, you may notice a red flashing light. If you do, this means the Volt is too heavy and is putting a strain on the motors so you will need to remove some bottom weights or even the your phone’s protective case if you have one on. 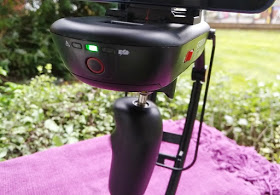 Blue and Red LED flashing one after the other means the Volt is running a self test. If the self test fails, blue, green and red LEDs will flash in sequence (power down the Volt to clear the self test and start again).

The green light on the Volt indicates the Volt is set to Movie mode, which is switched on by pressing twice the round button on the back of the Volt. As the name indicates, Movie mode reduces rotational shakiness by increasing the friction and natural inertia to improve control and to prevent movement and rotation so the smartphone won’t rotate around the gimbal handle which is the smartphone’s center of mass. 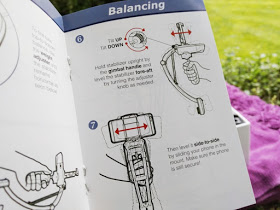 Sport mode is great with the Volt Steadicam for following action or tracking shots. The difference between Sport Mode and Movie Mode is that in Sport Mode friction is only increased in ’tilt’ whereas in Movie Mode friction is increased in both tilt (angling up and down) and pan (angling side-to-side). Movie mode gives you less mechanical framing. The Steadicam Volt smartphone stabilizer can be used with two hands for following action without lag when panning, which is very easily done with a light touch of your thumb. The Volt feels more responsive than any traditional 3-axis gimbal.