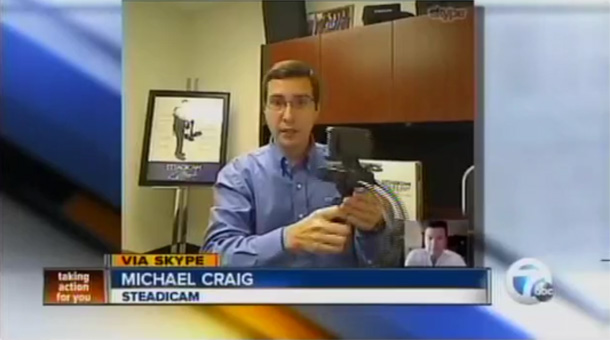 “The idea behind the Steadicam “Smoothee ”,” Tiffen’s Michael Craig explains during a Skype interview, “is to isolate the camera so that when you’re moving it’s a completely still image. Basically what you’re doing is taking the center of gravity of the camera and bringing it down to the handle so any movement you’re making is at the center of gravity and isolated from the image.”

A side-by-side comparison shows a startling difference. Video taken with a hand-held iPhone shakes, jolts and lurches with each step. The Steadicam video however floats smoothly as if the camera were gliding on air.

Craig explains the Steadicam Smoothee is designed for the home video market.

“People go to the zoo with their family and want to shoot some decent footage. They go on a trip to Italy, go to the beach. Whatever they’re doing we don’t want them to make their viewers sick.”

The Steadicam Smoothee retails for $169.00 and comes with mounts for both the iPhone and GoPro HeroCam series. A mount for the new iPhone 5 is in the prototype stage and will be available soon.

Stephen Clark allowed to post this article on Steadicam News.