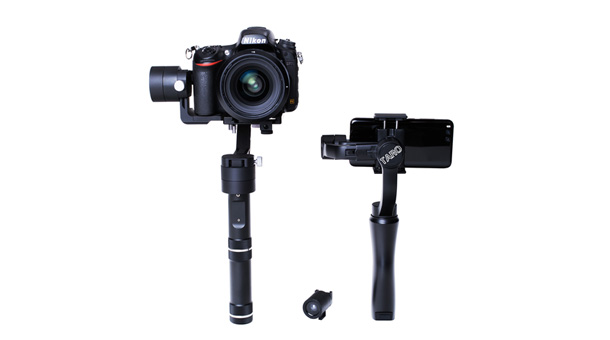 The Taro smartphone ($199) and DSLR ($599) kits are now available as well its tracking module ($99), which can be used with existing Bluetooth stabilizers and updated with Taro’s auto-tracking technology.

“In developing Taro, we’ve essentially designed a robot that operates your camera just like a real cameraman could,” said Taro founder, Hao Qian.

Qian says the secret to Taro’s tracking lies in the combination of a flickering sequential infrared tag and tracking module that contains an infrared camera, which work in tandem to rapidly identify which part of the frame is integral to a dynamic action sequence.

“Taro can instantaneously establish the intended object’s approximate location,” he said. “Taro also has a powerful learning algorithm that immediately eliminates sub-optimal positioning, precisely pinpointing the object’s exact location – which results in the perfect balance between efficiency and accuracy.”

With its blazingly-fast infrared tracking algorithm that performs 30 calculations per second, Qian says Taro makes it possible to track objects moving as fast as 50 miles per hour.

The Taro Team got the inspiration for the device from a skateboarder when he was explaining the difficulty he was having while trying to capture footage of the fast-moving sport.

“When filming fast-moving sports activities like skateboarding, it’s often necessary to capture an object when we ourselves are also moving at high speed, so it can be a real challenge to simultaneously pay attention to both our own movements and the screen and all too often that leads to an object being out of frame,” Qian said. “With Taro’s Dynamic Tracking, and our auto-tracking technology, Taro ensures that your target is always in frame – and without you having to focus on the screen, either.”

Taro also incorporates a stabilizer that uses motors to neutralize camera-shake, and is equipped with three ultra-high torque, brushless motors which react much faster than any other products on the market today, which guarantees the user has a radically smoother shooting experience.

Other features include action sequencing, following titles, auto-cuts, filters, and time-lapse photography and “all kinds of goodies and cool effects” – and lots more in the pipeline.

Features include:
– Auto-tracking
– Dynamic tracking (Tracking even when the cameraman is also moving)
– Maximum stability (Eliminate video jitter)
– Stabilizer Compatible (Turning any existing Bluetooth stabilizer into an auto-tracking one)
– Action Sequencing (Turning a normal video into action sequence photo or videos)
– Auto-Cut (Auto-cutting automatically, thus detecting and eliminating unwanted motion to ensure captured footage is as good as it can be)

Taro is now available at early-bird crowdfunding discounts, for more information, or to purchase Taro, visit the Taro campaign page on Kickstarter.

About Taro Technology Inc.
Located in Los Angeles, Calif., Taro Technology is made up of a group of software developers who have focused on App development for seven years, successfully developed 12 Apps and accumulated more than 11 million users. The company has worked with the world’s major class suppliers who serve companies including Samsung, Apple, DJI and many other world-famous brands. For more information, visit TARO.ai.