Home Reviews The DJI Ronin 2 – Packing the Muscle and the Moves! 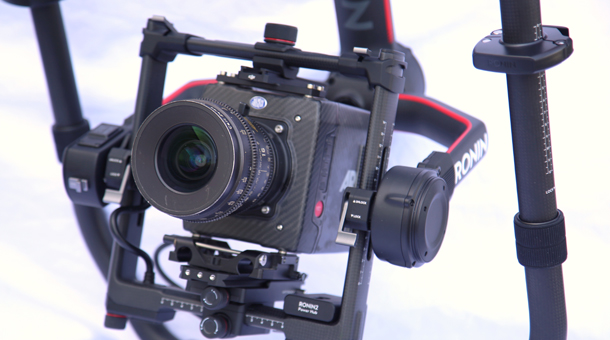 Back in April 2017, DJI announced their next generation three-axis camera stabilisation system: the Ronin 2. Set for an autumn release, the Ronin 2 promised a payload capacity of 12.6kg (30lbs) – around twice that of its closets rival, the Freefly MōVI Pro. In June, DJI published the retail price of the Ronin 2 Professional Combo as $6,999 USD – putting it in a similar price range to Freefly’s equivalent offering: the MōVI Pro Handheld Bundle (priced at $6,500).

With the Ronin 2 finally shipping at the end of September, we were eager to test one as soon as we could – and to see how it compared with the MōVI Pro (check out our 5-star MōVI Pro review from July 2017 here!). Thanks to our friends over at MyActionCam, we got to try out their freshly delivered Ronin 2 in early October. Read on to find out what happened when our gimbal expert David Zih loaded it up with an Alexa Mini and Arri Ultra Prime T1.9 16mm lens and put it through its paces! 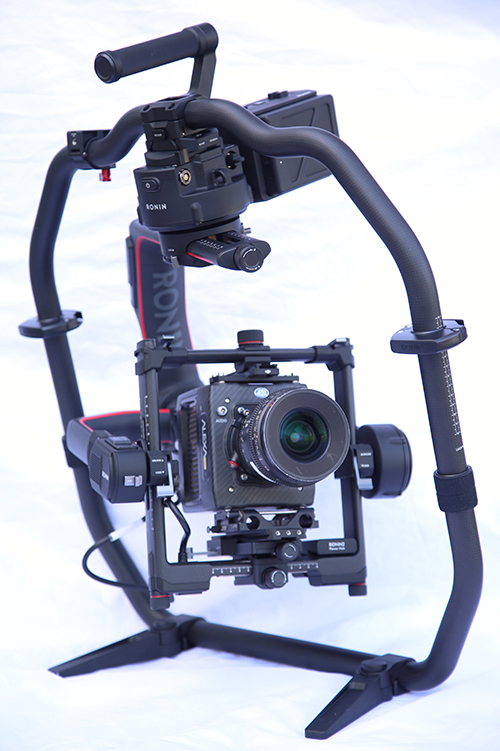 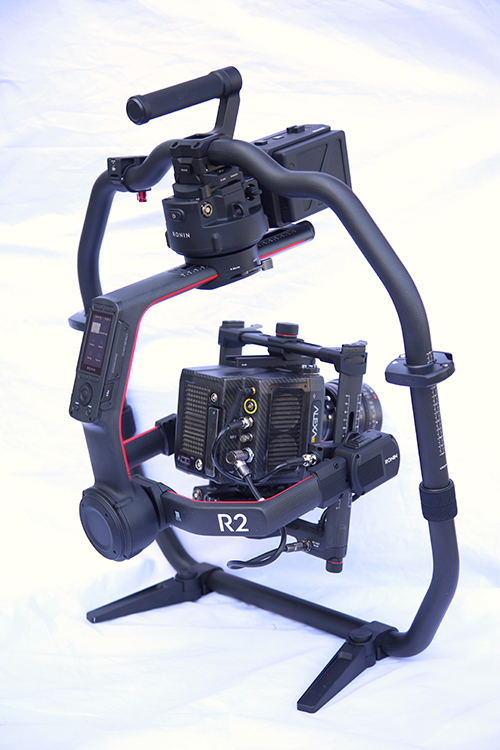 What Is it?
The Ronin 2 is a versatile film production rig that can deliver stabilised camera shots with a particular emphasis on enabling control of the camera whilst the rig itself is in motion. Not only does it offer the same type of shake-free camera motion as its cousin the Steadicam, but its computer-controlled functionality offers a much wider range of camera stabilisation and movement options – either by holding the rig itself or via its remote control capabilities.

After the first set-up on a given production day the Ronin 2 can be fitted to (and interchanged across) an almost limitless number of production devices – such as dollies, cranes, and hand-held and operator-mounted rigs (including the Grip ring as supplied with the Ronin 2 Professional Combo). However, given the weight of the Ronin 2 it is all but prohibitive for single-person Grip-ring operation – and it is also too heavy for most of the heavy-lifter drones that are available on the market.

The Ronin 2 Professional Combo includes the Gimbal itself, a Grip ring (with two set-down feet) and a joystick Remote Controller. The gimbal weighs 4.2kg (9lbs) and comes equipped with hot-swappable batteries, battery chargers, a camera top cross-bar and base plate, rods, various cables, an Accessory Mount, a Hex Tool and a watertight protective case.

The Grip ring ready-fitted with two set down feet

How Does It Work?
The Ronin 2 is a gimbal cage, with concentric carbon-fibre square frames and rails – which enable the tilt, roll and pan movement of the camera. Once you’ve fitted your camera package onto the Ronin 2 and completed the manual balance, you then let the computer system take over to automatically fine-tune the balance. 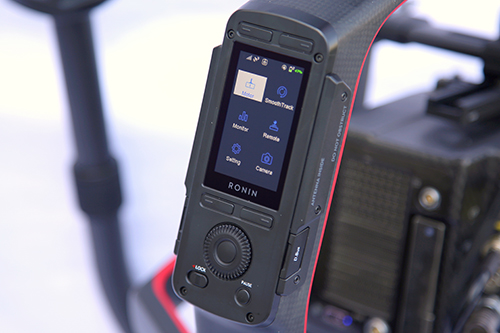 Computer ‘brain’ to the rear of the gimbal 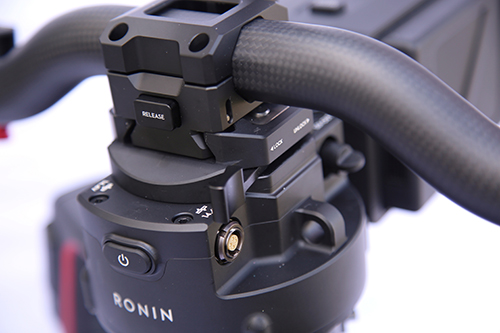 Top socket for attachment to the Grip ring and other rigs

The Ronin 2 incorporates a top socket which allows the rig to be securely attached to its corresponding male plug on the Grip ring, or to the Universal Mount which can be attached to most production devices.

Once you’ve manually balanced the gimbal, you then proceed to the computer set-up and to the automatic fine-tuning via the onboard touchscreen interface (or through the smartphone app). The Ronin 2 can be controlled remotely with the joystick Remote Controller, or with third-party interfaces such as the radio-controlled Walter Klassen gearhead or a Futaba-style radio-controlled handset. 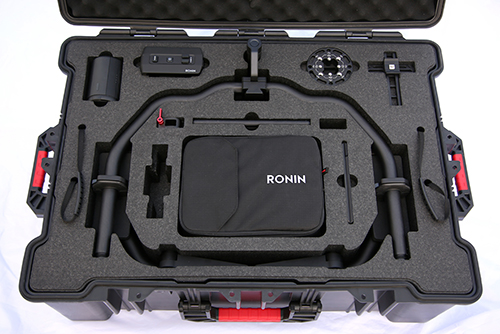 The Ronin 2 Professional Combo in its transportation case: top level 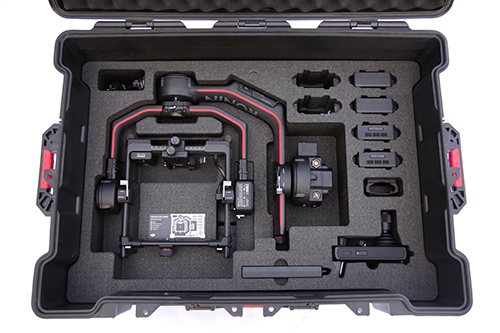 What Did We Think?
The Ronin 2 and its accessories are impeccably presented within the transportation case: everything has its own compartment in the foam packing, with accessories laid out on two separate levels. The gimbal itself is a heavy beast and the large motors, broad carbon-fibre rails, balancing screws and ergonomic Grip ring give the Ronin 2 a very technical look and feel.

The Grip ring comes in two parts (with ready-fitted feet) and can be quickly assembled. The gimbal has handy axis locks to aid camera installation – whereby they keep the gimbal steady in a central position, and stop it swinging around as you fit the camera. After fitting the top and bottom plates to your camera, the installation of the camera package is straightforward and intuitive. 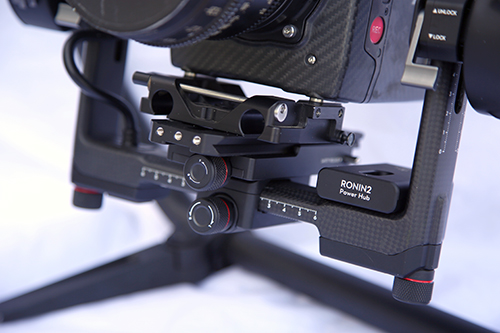 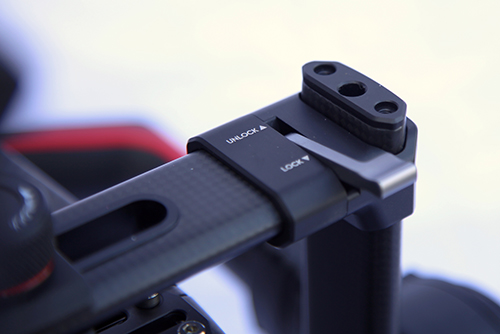 The metal clamp locks (which secure the horizontal cage-rail into position and hold the cage to the roll-axis rails) are not as ergonomic as they could be, and do not close into a definitive locked position – rather they tighten by degree. We also found that due to the length and weight of the clamp locks, the balance of the gimbal could be impacted by the locking position of the clamp locks – if altered during manual balancing.

Once the camera is installed on the Ronin 2, each axis can be manually balanced in turn by releasing the appropriate axis lock and by adjusting the corresponding balancing screw. The screw method for balancing is certainly a logical approach for fine-tuning, however it makes larger adjustments a bit more time-consuming. Ironically, the screw on the lower cage-rail is a little too sensitive, as even tiny adjustments makes disproportionately large changes on the horizontal tilt-axis balance (which again frustrates the balancing process somewhat). 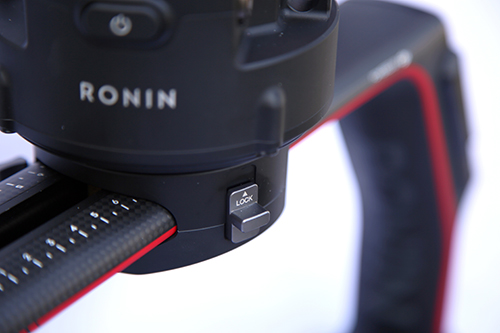 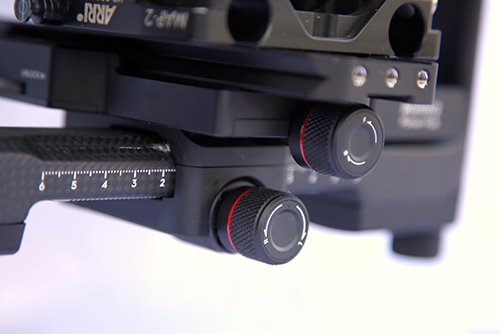 As the balancing screws don’t have locks themselves, it leaves them slightly vulnerable to accidental knocks and turns – which could throw the gimbal slightly off-balance during operation. The screws are nicely labelled to indicate the direction required for their forward and back (F and B) and left and right (L and R) balancing effect, however the roll axis screw shifts the balance in the opposite way to what you might intuitively expect (even though its labelling absolutely indicates the correct direction).

The control interface for the Ronin 2 is very intuitive, and although the auto-tuning options are somewhat limited in terms of all the variables you can change, this doesn’t impact on the computer’s balancing accuracy – and this simplicity actually makes for quite a speedy set-up process. It should be noted that there is only room for five user-defined profiles with the current operating system – and although this is probably sufficient to cover most types of gimbal work, it might be somewhat limiting if you want to retain profiles for multiple tailored jobs.

The action and performance of the Ronin 2 in general is really top notch. We tested the various handheld and remote control modes rigorously and the gimbal behaved impeccably – with strong, receptive and fluid motion. We were able to effortlessly switch between modes, and customise the settings and sensitivity – and the Ronin 2 delivered each and every time. 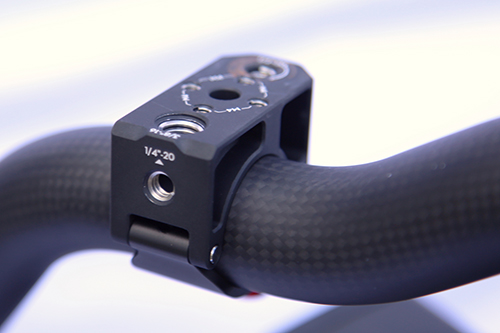 In terms of Ronin 2 accessories, the Grip ring is as strong as you would expect and has a well-designed shape – however with its 30mm diameter it is currently too thick to be used ‘as-is’ with the Walter Klassen SlingShot, therefore an adaptor would need to be bought (or built) to allow it to fit.

The Ronin 2 Professional Combo includes a single Accessory Mount – however this is only sized to fit on the Grip ring, whereas Accessory Mounts will also be critical for the gimbal itself to create a secure and professional-looking expanded rig set-up. The Accessory Mount is however equipped with multiple thread sizes which means that you can quickly and easily attach almost any accessory to it.

Unfortunately, the Remote Controller included in the Professional Combo is the weakest aspect of an otherwise very impressive Ronin 2 outfit. Although it’s equipped with key settings including pan, roll and tilt sensitivity, a record button for compatible cameras, switches for changing the mode and profile (with ‘re-center’ option), and a good joystick and roll-axis dial – the Remote Controller unit itself is very small and not so easy to keep steady in your hand or to hold tight to a flat surface. Therefore, this might impact on your ability to make precision camera movements, particularly if you yourself are in motion whilst operating. 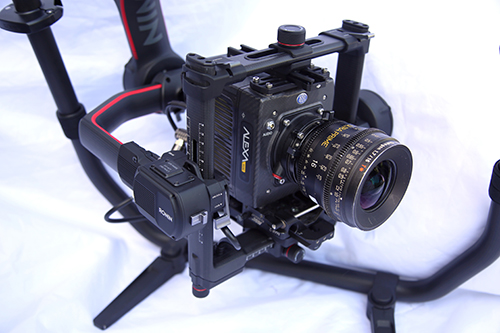 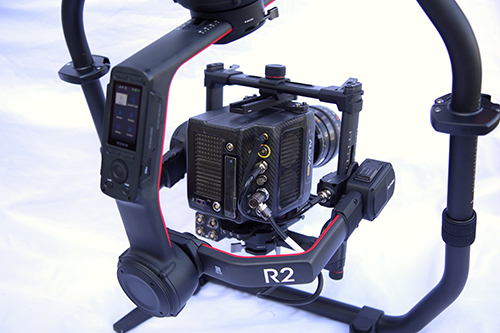 Final Word
Although we’ve highlighted a few minor shortcomings with the Ronin 2 we did absolutely love the rig! It’s strength, movement and functionality are simply exemplary, the interface is very effective and the axis locks are a really nice touch.

Despite the fact that the Ronin 2 can’t currently be used with most drones and that it’s not really useable for a single operator with the Grip ring (and will even be a struggle with a SlingShot-type harness), the scalability of being able to use it with small-to-large camera packages and its highly compelling price-point makes this a very attractive proposition.

Therefore, we see the Ronin 2 fitting nicely in the niche between the MōVI Pro and the MōVI XL: where you might need a rig to carry larger payloads for multi-operator usage, but don’t quite need the muscle of a full-size camera head.

Even though the gimbal itself is a five-star performer, we’ve had to hold back a little on the Ronin 2 rating and award only four stars – due to the size of the Remote Controller. Although the Ronin 2 can be used with a gearhead or Futaba, using a joystick is really going to be the only choice for seasoned operators working in high-speed camera head scenarios – and with the Ronin 2 Remote Controller currently being the only compatible option, its small size might impact on the accuracy of making precision camera moves.

We will, however, keep that extra star in the locker just in case DJI roll-out a larger Remote Controller with integrated Focus/Iris/Zoom control!