Home Articles The Invention That Shot Rocky Up Those Steps 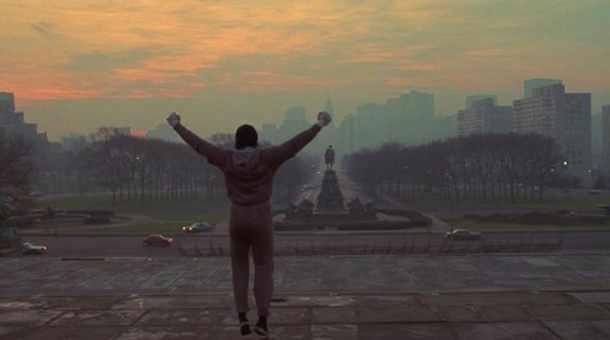 After scouting locations for “Rocky,” the director John G. Avildsen still had no idea how to pull off a crucial scene. Then his assistant cameraman invited him to view a demonstration reel for a new piece of equipment. It included a shot of the inventor’s girlfriend running up the stairs of the Philadelphia Museum of Art. “And I said, ‘Hmm, I know just where that’s going to go,’” Mr. Avildsen recalled.

The iconic shot of Rocky running up the museum steps was made possible only by the Steadicam, a camera stabilizing system first used in a feature film four decades ago — Hal Ashby’s “Bound for Glory” in 1976. The Steadicam also gave us such staples of movie history as Danny cycling around the Overlook Hotel in “The Shining” and Henry Hill leading his future wife, Karen, into the Copacabana through the nightclub’s kitchen in “Goodfellas.” The Film Society of Lincoln Center is observing the device’s anniversary with a retrospective this month, “Going Steadi: 40 Years of Steadicam.”

“That’s a big, long time span for a mechanical invention in this day and age,” observed Garrett Brown, 74, the Steadicam’s Philadelphia-based inventor.

The Steadicam can move smoothly in any direction, up stairways, around corners, along gravel roads. Its operator wears a vest attached to the camera rig; through the principles of Newtonian physics, it effectively renders the camera itself weightless and controllable by fingertips.

“It’s like the neck of a swan or something like that, if you wanted to pursue that analogy,” Mr. Brown said. “It has reach, and that reach is part of the ballet of dancing around with it. And that goes in combination with where your feet can get you.”

Multiple filmmakers speak of the way the Steadicam combines artistry and athleticism, requiring the camera operator, the crew and the actors to contend with obstacles in their way.

Brian De Palma first used the Steadicam, with Mr. Brown as an operator, in “Blow Out” (1981) for the opening sequence, an elaborate horror movie parody in which a slasher attacks coeds. “Choreographing the shot, getting the psychopath to hold his knife up in front of the mirror at the right time — it was a kind of joyful evening,” Mr. De Palma said by telephone. He went on to use the Steadicam in many films, including “Raising Cain” and “Carlito’s Way,” showing in the Film Society series.

For Mr. Brown, who taught himself filmmaking, movies came after a folk-singing career (as part of the duo Brown & Dana) and a stint selling Volkswagens. He found himself working in commercials at a time when the only way to create smooth camera motion was to put the camera on a dolly, in a camera car or on a crane. He was pained by the unwieldy setup of a 12-pound camera on an 800-pound dolly.

“The sight of that pinheaded little camera on that huge dolly and the attendant difficulties of schlepping it around on pickup trucks and laying my paltry rails here and there outdoors really was so absurd,” Mr. Brown said. He wanted to isolate the camera from the motions of the person controlling it — the kind that cause hand-held shots to appear shaky. 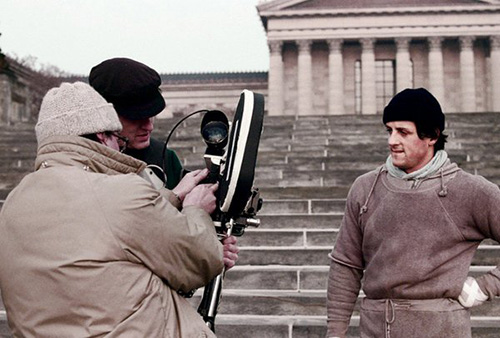 Preparing the Steadicam to track the “Rocky” shot up the steps of the Philadelphia Museum of Art.

The key ingredients were a gimbal, which came from Mr. Brown’s sailing experience; counterweights, to give the camera stability; an articulated arm — an idea he got from a motel desk lamp — attached to a harness that a camera operator could wear; and a way to see through the lens. He originally used a fiber-optic viewer intended for medical examinations.

In a sense, Mr. Brown had realized a dream of filmmakers and theorists who treasured camera motion; it’s hard not to wonder what Max Ophuls or André Bazin would have made of the Steadicam. “Abel Gance — he was fabulous at moving the camera,” Mr. Brown said, referring to the director of “Napoleon,” the 1927 silent classic. “He did extraordinary things, but he didn’t have this tool for stabilizing. I would have loved to have shown up on his set.”

In the earliest Steadicam movies, Mr. Brown operated the apparatus himself, and he continued to do so for three decades. Now, he said, Steadicam operators make expert shots for TV news broadcasts and from the sidelines of sports like football and soccer.

Robert Elswit, the cinematographer on two Paul Thomas Anderson movies in the Film Society series, “Boogie Nights” and “Magnolia,” considers the Steadicam essential. “To me, it’s not a specialty item,” he said. “It’s usually there all the time.” The results, he added, are sometimes “not even necessarily recognizable as a Steadicam shot. You just use it to get something done in a simple way.”

Mr. De Palma cautioned that the Steadicam is only a tool, a way of showing the viewer an environment. “You need a lot of sophisticated technicians to pull off a really good Steadicam shot, and that sort of comes with making movies in the studio system in Hollywood,” he said. 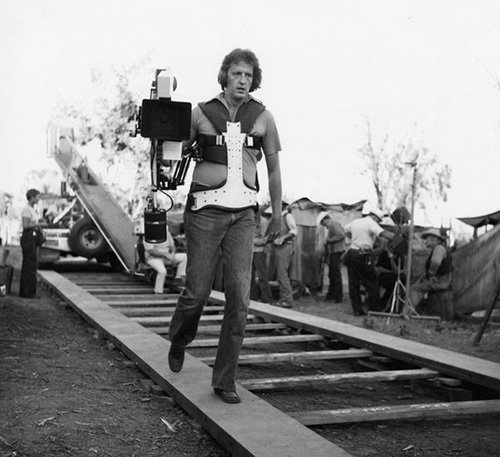 Garrett Brown, outfitted with his Steadicam on the set of “Bound for Glory,” the first film to make use of it.

Digital cameras make it less complicated to light scenes, he noted, and the equipment weighs less, leading to what he sees as the Steadicam’s overuse. “You see an abundance of Steadicam shots that are completely ridiculous,” Mr. De Palma said. “God knows, in television, they do it all the time. People are always walking and talking and going around corners.”

The Film Society series emphasizes the Steadicam’s global reach in films like Alexander Sokurov’s “Russian Ark.” That film consists of a single 96-minute Steadicam shot in the Hermitage at St. Petersburg, made possible by the lack of time constraints on digital cinematography.

Mr. Brown said he “got a kick out of” that one, adding: “I am not personally a fan of long one-take-type shots, because the audiences don’t pay any attention to cuts, and cuts are useful dramatically. But I can admire them when they’re well done, and I’ve done a few that I’ve loved. ‘Russian Ark’ almost defines the term ‘tour de force’ because it just stretched that bubble as far as it could be stretched.”

Mr. Brown is still inventing and promised a Steadicam improvement in April.

And while a number of his other products face obsolescence, like the SkyCam, which was devised for overhead arena shots, he has watched the Steadicam’s use evolve far beyond him.

He has held workshops for Steadicam operators ever since “The Shining,” a film he likened to a master class in the device. “If there was only one violinist in the world, he or she would be in the circus,” he said. “But if there are 100,000 violinists, a good one — that’s really a worthwhile thing to be. This gets better the more people use it.”