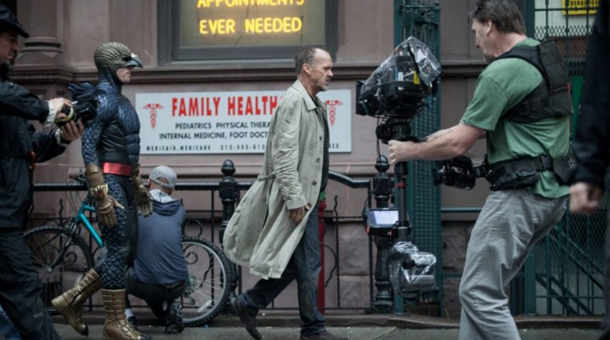 How much information can you give to the audience in one long take?

You’ve had that moment before. You’re sitting there on the couch, watching a scene that feels like it’s been going on a few minutes when the realization hits you.

“Wait, has this all been one continuous shot?”

You rewind just to be sure and watch the scene again, and sure enough, it’s all one long take. You’re blown away.

And you should be because correctly executing long takes in movies is extremely difficult. Everything has to go right, and I mean everything. So why do directors choose to utilize long takes? And better yet, why would anyone be crazy enough to film a project as one continuous shot movie (also known as a oner film)?

We’ll answer those questions and more as we do a deep dive on long takes, discuss their utility, take a look at some memorable long take examples, and also explore long take films.

Long Take Definition
A long take is a shot that lasts much longer than the standard editing pace of the movie itself or movies at large. Long often takes – but not always – require elaborate camera movement and blocking.

Now that we’ve defined what a long take is let’s discuss why directors use them.

When to Use a Long Take
The long take is an excruciatingly tough trick to pull off, but when done correctly, it provides the director and their film with a signature moment; one that will be talked about, dissected and mimicked. A long take allows a director not only to show how creative they can be but also indicates a level of control and confidence that likely isn’t limited to the long take.

Regarding the tangible impact on a story, a long take can also provide a certain kind of continuity to a scene that might not otherwise exist. Continuous shots can also create a greater sense of scope, drama, tension, and immediacy for the viewer. There are different kinds of long takes, but in general, we as the audience feel much more like we’re in the moment with the characters during a long take than in a traditionally-shot scene. We move through space and time with them, and the result is often something extraordinary.

Rather than continue to talk about when to use long takes, let’s take a look at some long take examples that make the case better than words alone.

In this scene, the camera travels a great distance, and in doing so, it allows the audience to get a real sense of the scope and scale of a war-torn Dunkirk. We see just how many soldiers there are and see what the minutiae of war are like. There’s carnage, sure, but there’s also boredom as a soldier uses a pommel horse, as well as joy, sadness, anger, and exhaustion. We get the full gamut of the human condition in this sequence, and that’s only made possible by the continuous shot.

This is a great look at how modern filmmaking works with the long take, but what about a long take rooted in the past?

I love the opening to Orsen Welles’s Touch of Evil.

This three minute and thirty second opening shot takes us through an intense journey as a bomb is planted on a car. We are there as the literal ticking clock takes us on a journey through the crowded streets.

This not only builds tension, but it grabs the audience right away and thrusts us into the excitement of the movie.

Speaking of the audience being sucked into a world through a long take right away…our next long take example comes from Robert Altman’s The Player.

This is the opening scene of the feature, and it serves as a de facto tour around the film studio; it introduces us to our characters, sub-plots, and the world of the studio. Using a continuous shot here captures the hustle and bustle of the film industry and the frantic nature of the people who work within it. The sequence also establishes the tone of the film and features our first hint that Griffin Mill is receiving death threats.

Next up, Alfonso Cuaron’s Gravity.

Much like Altman does with The Player, Cuaron chooses to open Gravity with a continuous shot. Only, this one is on a slightly larger scale. It lasts a whopping 13 minutes and takes place in outer space. Cuaron captures the sheer majesty of outer space and makes us feel like we’re there alongside the astronauts. As the tension slowly ramps up and things go wrong, we’re with Stone and Kowalski as they are thrown around like rag dolls. We’re disoriented and panicked with them and feel like we’ve also been left to die in the expanse of space.

That is the magic of the long take; it immerses the viewer in the story in a way that nothing else can.

Our final long take example is arguably the most famous oner of all time. It wasn’t the first long take, but it set the bar for long takes in movies.

The infamous Copacabana sequence in Martin Scorcese’s Goodfellas is a masterpiece. We follow Henry and Karen through the back halls, corridors, and kitchen of the club and watch alongside Karen as Henry interacts with everyone. He’s at home in the hustle and bustle; he’s intimately connected with not only the people in the space but space itself. He’s practically a king, and the scene beautifully showcases that reality and simultaneously serves as a three-minute long whirlwind for Karen.

This is her first date with Henry and if we as the audience feel swept off our feet, imagine how she feels? This shot not only establishes character and world but also advances the plot in that it doubles as a seduction of Karen.

Scenes like this are why Scorsese is one of the best.

What’s an example of a long take film? Well, it’s funny you should ask…

Long Take Films
Let’s start with something that uses all its efforts to create a movie that is perceived as one long take. I’m talking about Birdman.

Director Alejandro González Iñárritu and cinematographer Emmanuel Lubezki put a ton of effort into making the look and feel of the movie be a stream of consciousness. The lack of cuts keeps us in our lead character’s head and shows us the mania of being inside his head.

But from superheroes, let’s jump into a dystopian future.

Children of Men is a long take film, and arguably the most heralded one of all time. It’s not often you see a oner in a film, let alone as many as there are in Children of Men.

The longest one lasts over 6 minutes and is one of the most impressive sequences ever put on screen.

This sequence follows Theo as he’s captured by the Fishes, escapes, and makes the incredibly difficult and dangerous journey through the war-torn streets, into the building, and upstairs to Kee. The danger is immediate, and we’re right alongside Theo and develop the sensation that death is lurking around every corner. It’s a completely immersive scene that grips you and doesn’t let go.

This is just one example of what makes Children of Men a long take film. If you added up all the shots that last longer than 45 seconds in the film, they would equal 32 minutes, which is a quarter of the film’s runtime. That’s remarkable. If you have a half hour, take a look below and marvel at how Cuaron uses long takes.

Rope, however, is. Better yet, it’s edited in such a way as to appear to be one continuous shot movie. But it’s not. Check out the hidden cuts below.

Rope is a very different sort of long take film than Children of Men, and that’s the point. There’s no one genre, kind of scene, or specific reason to use a long take. It’s up to you as the director to determine when and where it makes sense in your movie.

It does. Several do. Let’s call them oner films.

Oner Films
There aren’t very many oner films, but the German crime thriller Victoria may be the most impressive.

The film runs well over two hours and follows a Spanish woman named Victoria who has recently moved to Berlin, doesn’t speak much German, and knows nobody. This one-take film tracks Victoria as she meets a group of men and spontaneously walks around the city of Berlin with them. Things quickly kick into a higher gear and the genre elements of the film come into play as things go away.

The continuous shot allows us entry into a world that’s as strange for us as it is for Victoria. She knows as little as we do and by shooting the entire film in one take, director Sebastian Schipper forces us to relate to her experiences and her state of mind. We’re with her in real time for over two hours feeling what she’s feeling, which makes the violent climax and payoff all the more impactful.

That’s the power of the oner film.

Summing Up the Long Take
You’re still trying to fathom how Alfonso Cuaron shot those sequences in Gravity and Children of Men, aren’t you?

It’s understandable because they are both unparalleled in their choreography and scope. We may not know precisely how Cuaron pulled it off, but we can see why he did it in the result of those long takes, just like we can see why other directors use long takes in movies.

Again, there’s no one reason. Long takes can be used to reveal character, track a character’s journey, set up sub-plots, introduce us to a world, set up jokes, build tension, add a scope, reveal conflict, or in some cases, all of the above.

They’re an extremely flexible tool and one that all directors should be aware of. Long takes (and oner films, for that matter) are extremely difficult to pull off, but when executed correctly, they can be dazzling, gripping sequences that elevate your story to another plane, and that’s the goal at the end of the day: tell the best story possible.