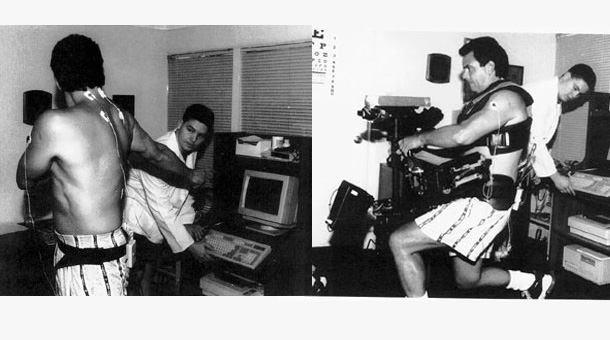 Have you ever wondered just what forces are exerted on the back while using Steadicam? This study was done to find that answer.

A dynamic Surface Electro Myograph (SEMG) was used to measure the increase in muscle activity while an operator was wearing a 70 lb Steadicam body-rig. 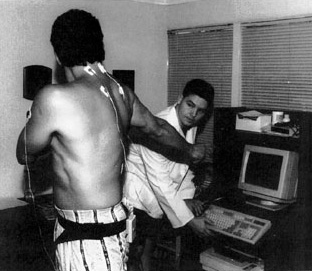 Electrodes on Glenn DiVincenzo, SOC register muscle activity during movement. He turns as tough moving a Steadicam to the side, while Dr. Carl C. Howard III uses the computer to record the result.

The study was performed on three people. Glenn DiVincenzo, SOC (Subject 1), a 6.1“ 185 lb male, Liz Ziegler, SOC (Subject 2) 140 lb female. Both of these people were experienced Steadicam operators. And Carl Howard, DC (Subject 3), a 6.1“ 210 lb male, who had never seen a Steadicam before, let alone operated one.

Methods
The basic principle of the SEMG is simple. When a muscle contracts it gives off electricity which can be measured in micro-volts (1/1,000,000 of a volt). The more a muscle has to work the more electricity it gives off. For this study, measurements were taken along the posterior muscles of the neck along with the posterior muscles of the low back. Measurements were first taken in the 5 motions without the Steadicam apparatus and then with the Steadicam apparatus on. For each motion the two figures were compared and a percent difference was obtained. The results were quite interesting. 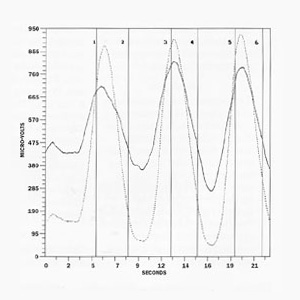 Results
It must be noted that this study was performed on only three people and therefore should not be taken as scientific fact but as a basis from which to build our knowledge and better understand the usage of this equipment in a safe and effective manner. 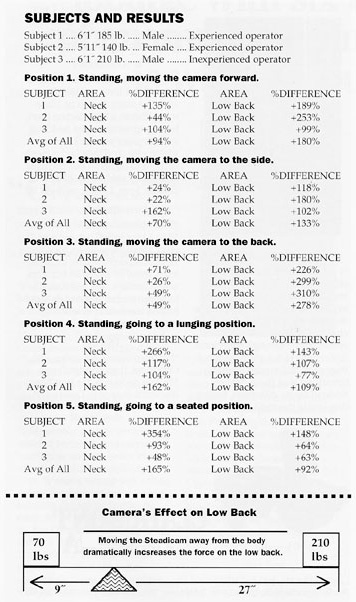 Gender difference
Another interesting finding was that the female of the subject group used the muscles in her low back 3 times more than the muscles in her neck, whereas the men used two muscle groups virtually the same amount. I postulate that these results were obtained because females are proportionally stronger in the lower half of their bodies, and males are more proportionally equal from upper body to lower body. 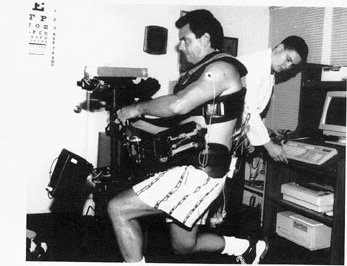 Standing, going to a lunging position.

Conclusion
The question remains, what can be done to use the Steadicam more safely? I have four main recommendations for those who will be using the Steadicam.
1.Proper posture – Proper posture in this case means keeping your legs under your weight at all times and avoid bending at the waist as much as possible. If it is required of you to put yourself in an awkward position with the Steadicam, have spotters standing close by to help you with any difficult movements.
2.Keep the camera as close to your body as possible – As shown in the figures and diagrams, the closer to your body you keep the camera to less stress you put on your back and the less chance you have of injuring your back. When those times arrive when you must hold the camera at arm’s length, only do it for short periods of time and use a support if possible.
3.Try to avoid standing and turning the camera to the back – The combination of the twisting involved and the stress put on the low back greatly increase the possibility of a low back injury, particularly a discal injury.
4.Maintain a good exercise program – Although no exercise program will guarantee freedom from a back injury, a good exercise program can greatly decrease the possibility of a back injury.

HOW?
I have four main recommendations to keeping a strong and healthy back:
1.Strengthen the muscles of the low back
2.Strengthen the abdominal muscles
3.Strengthen the leg muscles including glutes, quadriceps, hamstrings and calves.
4.Regularly stretch the hamstrings and low back
Proper exercises and stretching even for people already in great shape will undoubtedly make operating a steadicam much safer. 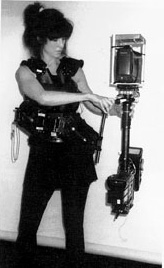 Stay safe
When filming with a Steadicam or any other type of camera for that matter always be aware of the safety measures involved. Taking the few moments to think of a safer way to accomplish a shot may save you immeasurable amounts of time, money and pain. 80% of all people will experience low back pain at some point in their lives. Don’t push the odds higher by not following good safety procedures and good common sense.

Acknowledgements
The authors would like to thank all those who gave their time and effort to make this project possible and successful: Bill Hines, Liz Ziegier, Glenn DiVincenzo, Ray Stella and David Robman, all active SOC members.