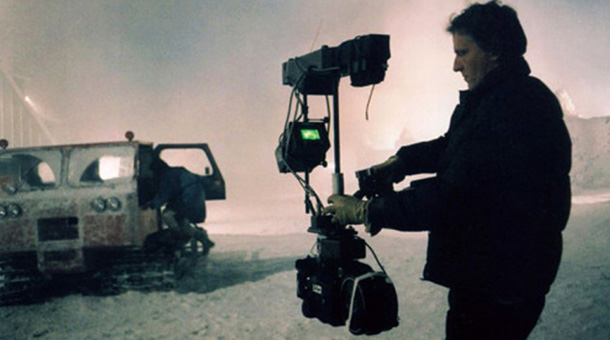 Camera movement is one of most important tools in any filmmaker’s arsenal, but knowing how and why to move is as important as knowing how.

For much of their history, movies didn’t move very much at all. For decades following the advent of sync sound, heavy equipment, loud cameras, and studio-bound methods of shooting kept cameras pretty much locked down (with some extremely notable exceptions). The introduction of the Steadicam in the 1970s was a huge step forward, and one key aspect of the digital revolution has been that even directors of the most modest means can take their cameras “off sticks” and move their cameras around with the felicity of Max Ophüls. But just because you can do something doesn’t mean that you should, and camera movement can become a stylistic crutch as easily as it can be a stylistic coup.

One thing that most narrative movies aim to do is establish a “filmic dream,” that is, a suspension on the audience’s part of the awareness that they’re watching a movie at all. A flashy camera move can break this dream in an instant, loudly announcing to the audience that they’re watching a movie. There are places for showy moves, of course, but as with almost everything in narrative filmmaking, it’s when they are these moves are motivated by story that they are most successful. That said, here are three examples of essential camera moves, and where you might want to use them.

Externally Generated Movement
In Directing the Camera by Gil Bettman, the author argues the most common type of camera movement is what he calls “externally generated movement.” Simply put, an externally generated camera move occurs when “the camera moves to follow something that is moving inside the frame,” and these shots make up the majority of shots in commercial Hollywood films today.

On the flip side, a filmmaker today who makes use of a more static, classical style of filmmaking might telegraph a more “indie” aesthetic, simply because stillness is not the quality we associate with contemporary Hollywood movie making. With this first type of camera movement, which is the least likely to call attention to itself or take the viewer out of the movie, the camera follows an object or character within the shot, and it creates a quality of “seamlessness,” as well as quality of realism that might be lost inside a cut. Here’s an example from one of the masters of the moving camera, Stanley Kubrick, from the beginning of Eyes Wide Shut.

Internally Generated Movement
One place Internally generated camera movement is found is in POV shots where the camera is moving along with a moving character, showing what they are seeing, (a character who is walking looks off-screen, and we cut to a moving POV shot). It can also be found when the camera moves to signify a change in a character’s emotions. One of the contemporary masters of this type of camera movement is Martin Scorsese, who often uses a baroque version of this move. The internally generated camera movement might call attention to itself, but if it’s well executed, the audience almost certainly won’t mind:

A third form of externally generated movement can be found in the many examples of crane shots at the end of movies, or shots that tilt towards the sky. Used in this way, the move signifies a quasi-objective viewpoint, as though the movie itself were rising into the heavens to contemplate the story just told and to gain a perspective on the people below.

Static establishing shots have been increasingly replaced with those that begin in the middle of the action.

Moving Establishing Shots
The traditional establishing shot (a basic part of film grammar) is a static and far-off-view of a location, used to orient the viewer in space/time. Bettman makes the point that this sort of static shot has increasingly been replaced by scenes which begin, visually, in the middle of the action taking place. Take for example this shot, from Spielberg’s Saving Private Ryan, which occurs right at the beginning. We are introduced to Tom Hanks’ Capt. Miller through a dynamic shot that starts in close on his shaking hands and moves up to introduce him and the soldiers he will be commanding as they storm the beach at Normandy. The shot communicates the chaos of the environment, sets up Capt. Miller’s fear (which will come back later as a plot point), and also serves to introduce the group of young men he will be leading into battle, which is a pretty neat trick for one shot.

Moving your camera is a lot like moving a car, in that it’s not the sort of thing that should be done without proper thought and know-how. However, when done well, camera movement can add an incredible amount of production value and dynamism to a film, as well as serve a crucial story-telling function, helping to orient the viewer not only within space/time, but inside of the story.