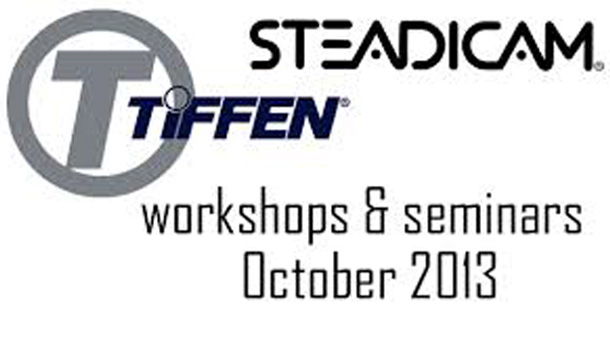 THE MOVING CAMERA – A DIRECTOR’S DAY WITH GARRETT BROWN
Tiffen invites China’s DP’s (Directors of Photography) and TV/film Producers to an inspiring event presented by famous American Cinematographer, Steadicam Operator, Inventor and visionary Garrett Brown. Titled The Moving Camera Garrett’s presentation shares his experience, knowledge and contributions to 40 years of Hollywood film‐making, during which he changed the way we see our world on­‐screen, largely made possible by his invention in 1974 of Steadicam.

GARRETT BROWN SCHOLARSHIP
To ensure as many students as possible have the opportunity to attend, and the workshop retains the same international standards as every Steadicam authorised workshop, the student fee will be significantly reduced in China thanks to Scholarship assistance on behalf of Garrett Brown and Tiffen. The subsidised fee is to be RMB 3000 (standard international fee is RMB9000).

The workshop will be conducted in English and Mandarin and includes all equipment and lunch (but no accommodation). During the workshop participants will learn how to setup and adjust a Steadicam rig, arm and vest; perform static and dynamic balance; understand posture and rest positions; start stop, panning, track shooting; effect a wide range of techniques to achieve Steadicam shots including switch shooting, ‘circle the subject’, actors seated & standing, steps and stairs, corners & corridors; as well as operating low mode, and working in adverse conditions.

OBSERVERS welcome at workshop
There will also be a limited opportunity for interested DP’s and camera operators to observe the students in training. This is another great opportunity to understand the importance of Steadicam in production, and how easily the current Steadicam systems and their operators can deliver flexible shooting options for directors, producers and production in general.