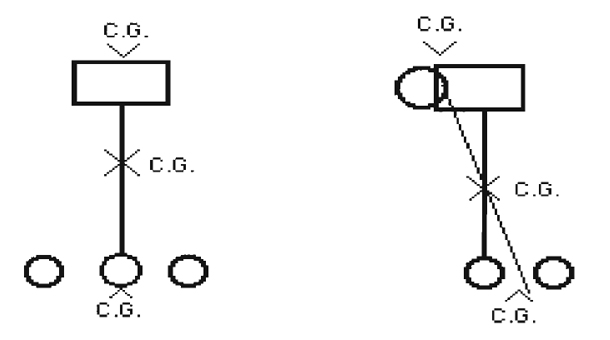 Getting your rig to behave sweetly..

Those of you who have attended any of our last half-dozen workshops are almost certainly aware that the subject of trimming the camera has been increasingly on my mind (trimming has nothing to do with the adjustment of the arm -it means the process of arranging and balancing the combination of camera and sled). Do we all understand why this can be important? If the camera/sled is not trimmed correctly, it might be in perfect static balance, but it can still “precess” when panned rapidly. (If you start to rotate (pan) a non-symmetrical object, it will tend to accelerate faster around whichever local axis has the smallest moment of rotational inertia) This axis may not coincide with the physical structure of your centerpost, so the Steadicam will appear to be trying to tilt up or down as you pan.

Since 1978 when “whip-pans” entered our repertoire, we have attempted to define some rules of trimming that will help put the rig back into symmetrical form with respect to this structural vertical axis. I believe that I can finally offer some information about all of this, and I am convinced that even normal-speed panning moves can be executed with more precision if these principles are understood and implemented.

My earliest prototypes were symmetrically arranged (bottom-heavy) triangles. They probably would have whip-panned beautifully if I could have avoided strangling myself with the fiber-optics viewfinder. Fortunately, the very idea of a rapid pan with this gizmo was years from even being dreamed of. As you may know, the “Model I Universal” was frequently used with the gimbal a full inch above the cg, but it was at least balanced fore-and-aft. Wrongly! We neglected to remove the junction-box when testing the balance, so the sled itself was back-heavy. See illustration 1. If a whip-pan had been attempted, the camera would have tried slightly to tilt down, as it attempted to rotate around the true (although non-structural) axis of least inertia. This axis is the invisible line between the actual cg of the tail-heavy base, and that of the now front-heavy camera/junction box. Not a disaster, but we didn’t have a clue. 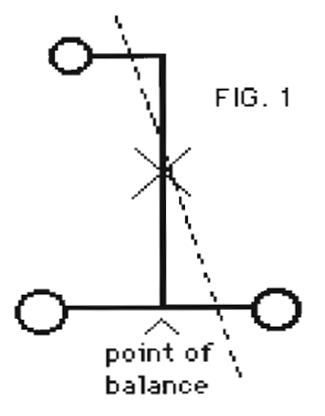 When its monitor was raised and moved forward, the Model II was inadvertently made extremely front heavy. The center post is at least 2 inches behind the cg of the sled. On “The Shining”, I was required, for the first time, to make whip pans , and since the true axis was again not lined up with the post and handle, the II would not rotate flat unless you made an extraordinary effort to force it down during the pan. I’m not a scientist. I don’t reach automatically for the graph-paper and the calculator. I suppose I should have figured all of this out years ago, but it took me a while. A mere five years later, I concluded that if the Sled was restored to a balanced condition (true cg exactly at the center post), it would inevitably pan flat. This has recently proved to be incorrect. A lot of us tried fixing model II’s to rectify this situation, but I think if we were honest, we would admit that any improvement was largely wishful thinking and voodoo. The damned things would still not behave.

The Model III was designed to provide a degree of mobility for all of the components and thus to allow the kind of adjustments that I believed were necessary. In fact, as you will see, my original prototype III was more nearly correct than the final model, yet I insisted that CP move the battery an inch more to the rear, in order to balance the sled at the centerpost. (Of course we also forgot to remove the bloody junction box.) So, the unfortunate result has been that all Model Ill’s, particularly those with receivers, video transmitters, etc. tacked on, are now that much more difficult to trim correctly.

Seat-of-the-pants designing has its advantages and disadvantages. Think of the early days of flight, when aeronautical design had not yet landed entirely within the realm of mathematics. Designers who flew their own planes survived only by the Darwinian rigor of getting it right almost every time (by that standard, Rocky I would have been my last picture). Fortunately, Steadicam operating is slightly less hazardous, so I have survived my errors, and can only apologize to those who believed and practiced some of these earlier pronouncements. Let’s hope this new information is closer to the truth. If anyone reading this knows still more about the physics of “Trimming”, please correspond with me via the Letter, and we will publish the results for the enlightenment of all.

The fact is that we have neglected to consider a very important element in the balancing equation. In order to explain this, I will restrict myself to the particular example of the Steadicam III, so I can clearly refer to its various elements by name, and avoid calling things “weight # 1”, etc. For the purposes of this discussion, let’s assume that there is no junction box (we have removed it.), and let’s also assume that the battery, electronics and monitor all weigh the same (and, incidentally, that the camera weighs the same as the sum of monitor/sled/ battery). So. Ideal trim of the sled itself would indeed be an arrangement where its cg coincided with the center post -if the monitor were on the same horizontal plane as the electronics and battery. This is the missing element. In real life, the monitor is not on the same plane . Its cg is inevitably raised several inches above those of the monitor and battery. It’s height, of course, has no effect on the fore-andaft balance point of the sled. You could raise it all the way up to the top and this balance point would remain exactly the same. (The top-to-bottom location of the gimbal would naturally have to be changed.) So what’s the difference?

Compare the examples in Illus.#2 and #3. The first shows a Steadicam with the monitor on the same plane as the electronics and battery. Then #3 depicts the reductio ad absurdum of the monitor raised all the way until it is up in front of the camera. Technically, if you include the monitor with the sled, the sled can still be thought to be balanced at the center post. Clearly, however, this is now a fiction. The mass of the monitor has migrated and effectively joined the mass of the camera. The fore-and-aft balance of the entire rig has not changed, but now it would precess violently upon being panned. We have created a new axis with considerably less rotational inertia which extends between the cg of the cameral monitor and the cg of the electronics/ battery, and it is on this axis that the rig would pan most easily, despite the offset of the panning force that you are applying to the centerpost.

I have always (wrongly) felt that it was necessary to keep the monitor as low as possible to somehow minimize precession. In lo-mode I used to worry when the monitor position (for visibility) was so far removed from the plane of the electronics. Depending on the angle of the battery, I either had trouble with rapid pans or I didn’t. Have you noticed that sometimes the rig feels “sweet” and sometimes it doesn’t. Well now I want nothing less than to finally understand why this is and how it can be reliably put into a “sweet” condition.

I have recently learned that the rig can be beautifully trimmed with the monitor at any position from top to bottom. It’s just that the rules for balancing change as it moves. As soon as the monitor is raised, its mass begins to proportionately become part of the camera instead of the sled. Look at Illus. #4. The monitor is now located about halfway between the top and the bottom masses. Consider it a separate third mass, whose function is to balance both camera and electronics/battery. Clearly we can no longer just consider a line between the cg’s of these latter two masses to be the new axis of rotation. In practice, the monitor’s mass shifts this whole line forward, until, ideally, it coincides exactly with the centerline of the post. This Steadicam is now symmetrically balanced, and will now pan precisely around, this axis.

At the Masters, I expect to have some help working out practical rules and proportions based on these ideas -the “Grand Unified Theory” that will permit rapid and accurate trimming of any Steadicam configuration. I will report the results to you in the next issue of the newsletter.

For the present, I will leave you with a couple of practical observations: In general, the Model III Steadicam should be arranged so that the sled (monitor, electronics, battery, but no junction box) will balance on a point roughly an inch ahead of the post. Be careful that if you add receivers, video transmitters, etc. that you check the balance with these things in place. Mount one of these add-ons ahead of the post, and then adjust the location of the balance point by swinging the battery fore-and-aft. The principal here is that its OK for the entire sled to be front-heavy, and the camera correspondingly moved to the rear, because if you were able to check the balance of the sled with just half a monitor, it would balance at the post, and therefore the cg of the camera with half a monitor would also be exactly at the post. Those who have added Seitz’s Smm recorders, have had to implement the extra dovetail adjustment of the sled’s fore-and-aft, in order to avoid too much tailheaviness, since this is the worst possible condition for a Model III.

This is perhaps a bit rough to communicate on paper, but just remember this: Model II’s are still too front heavy, and need some extra weight at the rear. Model Ill’s need to be a bit front-heavy. And one final thing: if you’re trimming a III side-to-side, and need to shift the battery position, try to make sure it’s swung out to the left, as seen from the rear. If not, change holes on the camera mounting plate and try again. Why? The electronics are heavier on the right, and if the battery is also swung to the right, you are creating yet another false axis.

All of these “rules” can of course be broken. We did without them for years, and no one but an expert operator could ever detect the difference. A “Living Master” of course wouldn’t be caught dead precessing in public.